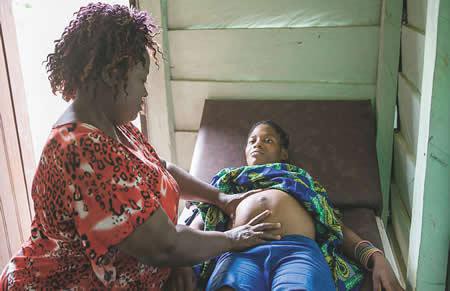 Two months after the traditional marriage ceremony between Mr. and Mrs. Anthony and Nkechinyere Agbasi was formalised, Mrs Agbasi conceived. The entire Agbasi family received the news with excitement. Considering the African culture that perceives children as divine gifts from God, families, relations, friends and colleagues looked forward to the save delivery of the baby.

Although, Mrs Agbasi had been counseled on the need to get booked at the primary health care (PHC) centre in Ijora for formal antenatal clinic sessions, she ditched that wise counsel and continued to see a quack nurse who uses her one-room apartment as treatment centre for both pregnant women and other sick neighbours seeking care.

Expectedly at the onset of labour, in the ninth month of the pregnancy, Mrs Agbasi found it convenient to move into the home of the unskilled ‘nurse’ who monitored the labour. Sadly, after delivery, she experienced profuse bleeding (haemorrhage) which lasted several hours. However, without the basic facilities to handle haemorrharge, Agbasi died while the newly delivered baby boy survived. The death of Mrs Agbasi shocked people in the entire neighbourhood of Ijora.

Within minutes of her death, her relations and neighbours gathered and discussed the sad development in low tune. “What could have happened,” a neighbour of the late Mrs Agbasi asked. According to the neighbour, all four children of Mrs Tina Cooker, another resident of Ijora, were delivered by this same nurse without any problem? This neighbor and others that were shocked by Agbasi’s unexpected death did not understand that postpartum bleeding or postpartum hemorrhage (PPH), which Mrs Agbasi experienced after delivery, is a major killer of women and a major contributor to maternal death in Nigeria. PPH is often defined as the loss of more than 500 ml or 1,000 ml of blood within the first 24 hours following childbirth.

Assuming that the death of Mrs Agbasi was an isolated case, it may have been written off as a non-issue but investigations by the ‘New Telegragh HEALTH’ has revealed that many pregnant women, during/ after child delivery die in the hands of quark nurses who lack the professional skills to tackle complications that arise from child delivery.

In another example that occurred six months ago, a quark nurse residing along Olojowon Street, Badia, Ijora in Lagos state, was woken up at about 11p.m on that fateful day by a pregnant woman whose labour had started. She took them into her two-room apartment where she monitored the labour progress but after two days, it became clear that the baby could not be delivered due to an obstructed labour from a narrow pelvis, according to the post mortem report.

That time was late night. By the time, the pregnant woman who was then unconscious, was rushed, under emergency to a private hospital nearby, she was rejected. Another quick move to take her to a nearby General Hospital at Awodiora along Mba Street in Ajegunle, Lagos, did not yield good result as she died on the way to that facility. Thousands of these kind of activities in the name of providing illegal medical treatment go on, not only in Ijora, Ajegunle and other communities; it is now very common in the country. It is necessary to state that these are contributing to maternal deaths in the country.

The United Nations Population Fund, UNFPA, estimates that Nigeria contributes 10 per cent of the worlds’ maternal mortality, resulting in about 111 women losing their lives on a daily basis. These were the submission of the Executive Director of the UNFPA, Professor Babatunde Osotimehin and the Permanent Secretary of the UK’s Department for International Development, DFID, Mr. Mark Lowcock at a meeting with Vice President Yemi Osinbajo in Abuja in September.

However, different states have different maternal mortality ratio. In Ondo State for instance, it is 189 per 100,000 lb. While global and national efforts are on to reduce maternal deaths in this country, the contribution of some quacks to sustain the status quo should be of major concern to both stakeholders and those patronising them. Proponents of traditional birth attendants, TBAs and quark nurses would simply argue that these same ‘nurses’ and TBAs have been taking deliveries in communities since ages and had become acceptable institutions. While this is true, medical experts also note that safe delivery arises from births that are not complicated.

The WHO estimates that between five to 15 per cent of child deliveries may result in complications and when that happens, a quark or unskilled personnel cannot handle it. It raises risk of death or maiming for patients. When severe post-partum bleeding occurs after child delivery like in the case of the late Mrs Agbasi, a quark nurse and an untrained TBA will become helpless and may not know how to handle such a medical emergency.

According to Dr. Oluwarotimi Akinola, an obstetrics and gynaecologist at the Lagos State University Teaching Hospital (LASUTH), Ikeja, Lagos, when severe bleeding occurs idenduring delivery, what may be required to save the life of the woman may not be mere blood transfusion. He added, “During severe bleeding, blood parts may be needed to stop the bleeding and save the woman.”

Akinola who is the vice president of the Society of Gynaecology & Obstetrics of Nigeria, SOGON, said often, the needed blood parts, may not be available in some health facilities.” Apart from haemorrhage (bleeding), other factors that could lead to complications during child delivery include obstructed labour, hypertensive disorders in pregnancy, infections/sepsis, anaemia, among others.

Clearly, when any of these factors contributing to birth complications, occur in a delivery taken by a quack, both mother and the unborn baby may face the risk of either dying or being maimed. What the above scenario translates to is that while quark nurses are able to deliver majority of the babies safely, those that are associated with complications may end in the death of mothers and some babies. Whenever, a pregnant mother dies in the hands of the quacks, the attitude of relations is that the victim is destined to go that way.

The questions that arise however are, “Should quark nurses contribute to care delivery? Are they licensed to practice in the health sector? Is it appropriate that a living apart ment should be converted into a care facility where drips are set up for patients and other medical treatment provided by unskilled and unlicensed personnel at the detriment of the public?

While it has become clear that these activities are perpetuated because of financial gains, medical experts said it was time to curb the illegal practices, to save lives, sanitise the system as well as pave way for quality healthcare services in the system. Dr. Leke Osunniyi, the Managing Director at Multishield Limited, said , the nation’s status books have lots of sanctions, fines and even imprisonment against quacks, “but these are not often implemented because of grey areas.”

He added that the Medical and Dental Council of Nigeria, MDCN was set up precisely to address quackery. However, Dr. Tunde Segun a public health physician, said “every woman should deliver in a health facility operated by skilled birth attendant or registered nurse/ midwife, adding that these were the categories of professionals the World Health Organisation, WHO, recommend as qualified to take delivery. Speaking in similar vein, Dr. Kehinde Okuande a Consultant Obstetrics and Gynaecologist at Lagos University Teaching Hospital, LUTH, said: “The moment a woman misses her menstrual period and finds out that she is pregnant through