Encounter With Malnourished Children Of Katsina 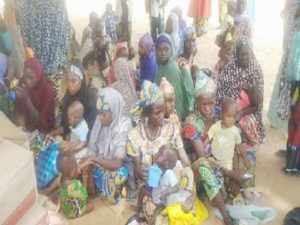 The visit by civil society activist and journalists to an outpatient therapeutic point where malnourished children from Katsina state and neighbouring Niger Republic are receiving treatment further exposes the enormity of challenges ahead as far as combating malnutrition is concerned, ANDY ASEMOTA writes

Were at Bumbum Outpatient Therapeutic Point, the MaiAdua local government area to monitor distribution of Ready to Use Therapeutic Food (RUTF) for malnourished children in the area. From what I saw, I was convinced that the NDHIS data which revealed that Katsina state is one of the states with higher cases of malnourished children in Nigeria is genuine! I saw children that could best be described as ‘Semi-Skeleton’ human. I have seen hunger written all over the bodies of those children we met. The number was outrageous which made me asked myself, how many malnourished children are in Katsina state considering the number I saw in just one community”

These were the words of Abdurrahman Dutsinma, the chairman of Katsina Budget Awareness Initiative (KTBAI) who, along with this reporter, were on the entourage of Save The Children International (SCI), to visit the SCI’s Community Management of Acute Malnutrition (CMAM) Project site.

Indeed, the enormity of the challenge can better be said than imagined because what was on ground at the OTP site in Bumbum community, said to be one out of the close to one hundred sites across the state is alarming.

Children that are heavily malnourished, stunted and ultimately wasted, were all over the face with mothers whose forlorn faces indicated desperation to see their ward and children cure of this malaise. This is all we saw when we had close contact with the malnourished children said to be from Bumbum community and other neighbouring communities of Niger Republic.

On Tuesday, 1st November, 2016, about a dozen journalists and activists from Coalition of Civil Society Organizations in Katsina State paid a visit to the Outpatient Therapeutic Point (OTP) for malnourished children at Bum-Bum community in Mai’adua Local Government Area of Katsina State.

The supervisory visit drew observers from Maternal and Newborn Child Health (MNCH) Coalition and Health Journalists Forum based on equal representation of the two groups. The trip was necessitated by the commitment of the activists and members of the press to have first-hand information on the scourge of malnutrition facing children in the state.

The significance of the OTP centre at Bum-Bum stems from the figures which showed that the centre is no just one of over 100 OTP sites in the state; it was at a time the largest in the country. The figures also revealed that over 100 children from the 11 catchment areas in the locality as well as from Niger Republic and neighbouring local government areas in the state visit this health facility weekly.

The Primary Health Care (PHC) Ccoordinator of the council, Nasiru Muazu, expressed appreciation to SCI for its dogged commitment in fighting malnutrition in the state.

Muazu pointed out that although much had been achieved in taming malnutrition since the inception of Community Management of Acute Malnutrition (CMAM) by development partners in collaboration with the relevant stakeholders, the area was yet to be spared of the malaise.

He revealed that there is high cured rate, high defaulter rate, low death rate and some non-recovery and pointed out the irregular disbursement instead of monthly supply of Ready to Use Therapeutic Foods (RUTF) and the need for complementary admission drugs for malnourished children, water and VIP latrines at OTP facilities in the area.

However, checks by LEADERSHIP Sunday shows that there has been no release from the nutrition budget even as the year is ending and next year’s budget issue has already commenced.

The Advocacy and Communication Officer of Save the Children in Katsina, Richard Musa disclosed to newsmen that UNICEF recommended the allocation of N200 million by the state government annually as five year strategic plan to raise the bar in nutrition development.

Musa noted that the government had been relying largely on the joint appropriation of the 15 local councils with about 100 OTP sites (the largest in the country) in its efforts to reduce malnutrition from the current threshold.

He said because the N3.75 million the local governments are expected to contribute monthly is not released promptly, that is why the last consignment of RUTF the councils received was in June this year.

What is more, the N275, 000 each local government is expected to actually give monthly was not remitted in the first four or five months of this year until the outcry over the delay was brought to the attention of the state government by the press.