HomeMidwives1,473 midwives deployed to PHCs to save mothers, children

1,473 midwives deployed to PHCs to save mothers, children 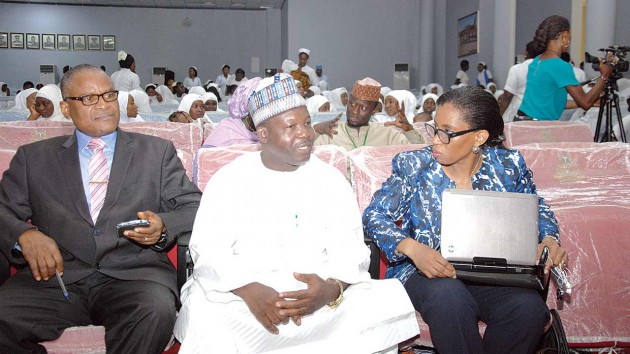 As part of efforts to improving maternal, newborn and child health outcomes and consolidating on the gains of the Midwives Service Scheme (MSS), the Federal Government through the National Primary Health Care Development Agency (NPHCDA) is deploying 1,473 newly graduated basic midwives to Primary Health Care (PHC) facilities in rural areas throughout the 36 States and Federal Capital Territory (FCT) Abuja.


Acting Executive Director of the NPHCDA, Dr. Emmanuel Odu, told journalists yesterday, that with 61 per cent of pregnant women receiving ante-natal care by a skilled provider in the country, only 38 per cent of births were attended to by skilled birth attendants while only 36 per cent deliver in health facilities.


Odu who spoke at the end of a two– day orientation workshop for the first batch of the new basic midwives, numbering 443, which started over the weekend, enjoined the participants, as skilled birth attendants to rededicate themselves and contribute to bridging the gap.


The MSS is funded through N1 billion budget in the 2016 Federal Government Appropriation for maternal and child health interventions by the NPHCDA.


The NPHCDA, under the 2009 Appropriation Act, was tasked with establishing the MSS. The MSS is a public sector initiative and a collaborative effort between the three tiers of government in Nigeria. A memorandum of understanding between the Federal, State and Local governments sets out clearly defined shared roles and responsibilities, which are supported by the strategic partners of the MSS. The MOU has been signed by all 36 states of Nigeria and is designed to mobilize midwives, including newly qualified, unemployed and retired midwives, for deployment to selected primary health care facilities in rural communities. The aim is to facilitate an increase in the coverage of Skilled Birth Attendance (SBA) to reduce maternal, newborn and child mortality.


Odu said that the orientation workshop for second and third batches of the midwives would hold soon in Kaduna and Edo States respectively.


According to him, the Agency and the Nursing and Midwifery Council of Nigeria (NMCN) are in partnership to place newly graduated Basic Midwives on a one-year mandatory service at PHC centres across the country.


Odu also disclosed that the Federal Government would collaborate with both States and Local Governments to sustain the programme.


The NPHCDA boss appealed to the midwives tosee themselves as agents of change, stressing that a combination of their professional skills, positive attitude, and care would stimulate health-seeking behavior and service utilization, thereby contribute to saving the lives of pregnant women, newborn and children in communities.


Director, Primary Health Care Systems Development in the Agency, Dr. Nnenna Ihebuzor, described the MSS as one of the flagship programmes of the Federal Government to reduce the high rate of maternal and child morbidity and mortality in Nigeria. She emphasized the triple return on investment from skilled attendants at birth – saving lives of mothers and newborns and reducing stillbirths. She disclosed that the orientation and subsequent training would equip the midwives with the knowledge and professional skills to save lives of mothers and children at rural primary health facilities across the country.